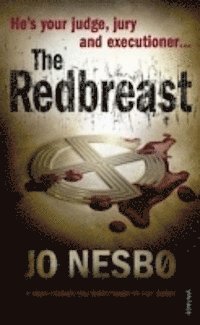 Harry Hole, drunkard, loner and brilliant detective is reassigned to surveillance after a high profile mistake. He's bored by his new job until a report of a rare and unusual gun being fired sparks his interest because of its possible links to Neo Nazi activity. Then a former soldier is found with his throat cut. Next, Harry's former partner is murdered. Why had she been trying to reach Harry on the night her head was smashed in? The investigation leads Harry to suspect that the crimes have their roots in the battlefields of Eastern Front during WWII. In a quest that takes him to South Africa and Vienna, Harry finds himself perpetually one step behind the killer. He will be both winner and loser by the novel's nail-biting conclusion. He's your judge, jury and executioner ...And he must be stopped.

What a nice surprise!

Jo Nesbo went straight up there with authors like Martin Cruz Smith and Robert Wilson. Two of my absolute favourite crime fiction writers!
The Redbreast is a great crime and war saga that moves from WWII-period to present time just before the millennium. A crime committed in present time bounce back all the way to the Eastern front.
Being complex at times ― Norwegians fighting for Hitlers Germany ― and a page-turner for the most― the plot is at times is absorbing―, The Redbreast is an accurate achievement of what a perfect blend of history and hard-boiled whodunit should be.
Arnaldur Indridason was my first experience with a Scandinavian country as location, but I got to admit that although I really like Erlendur and his beloved Reykajvik I think Harry Hole is a character that has the potential to be on level with Arkady Renko.

Ive already ordered Nemesis and after that, The Devil Star. What more can I ask for!