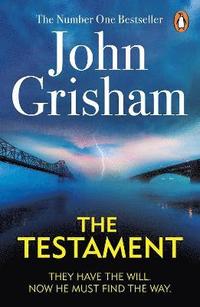 In a plush Virginia office, a rich, angry man is furiously rewriting his will. With his death just hours away, Troy Phelan wants to send a message to his children, his ex-wives, and his minions, a message that will toutch off a vicious legal battle and transform dozens of lives.
Becauce Troy Phelan´s new will names a sole surprise heir to his eleven-billion-dollar fortune: a mysterious woman named Rachel Lane, a missionary living deep in the jungles of Brazil.
Enter the layers, Nate O´Riley is fresh out of rehab, a disgraced corporate attorney handpicked for his last job: to find Rachel Lane at any cost. As Phelan's family circles like vultures in D.C., Nate is chrashing through the Brazilian jungle, entering a world where money means nothing, where death is just one misstep away, and where a woman - purued by enimies and friends alike - holds a stunning surprise of her own...


Utdrag ur boken:
He selected another, and handed it to Nate. "This is a Bible study for busy people. It's very good."
"What make you think I'm busy?"
"You're a lawyer in Washington, aren't you?"

"
Köp boken på amazon.se (betald länk)
Bok recensioner av The Testament :
gun
2012-02-08 10:14
This book is very entertaining and exciting. I loved the way that Troy Phelan chose to record wills and how he chose to end his life.
Nate O'Riley's adventures in the jungle was exciting and the woman, Rachel seemed to be a very admirable person.
I thought the book was very good.
Betyg 5