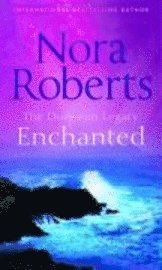 The Donovan Legacy features four stories about an unusual family. Morgana, Sebastian, Anastasia and Liam are cousins who share a special bond - they´ve inherited extraordinary gifts from their Celtic ancestors.

In Enchanted, the final book in the series, innocent schoolteacher Rowan Murray is fascinated by a lone wolf lurking around her Oregon cabin, but never does she suspect a connection to her darkly enigmatic and devastatingly handsome neighbour, Liam Donovan.


Utdrag ur boken:
The howl echoed, spread, filled the night with both demand and question. With power as natural as breath. And the whispers that flickered back told him only that a change was coming. Endings, beginnings. Destiny.
His fate was waiting for him.
Again the rogue black wolf with gold eyes threw back his head and called. There was more, and he would have it. Now the earth shook, and the water swirled. Far over the sea a single spear of lightning broke the blackness with a blinding white flash. In its afterglow for an instant - a heartbeat only - was the answer.
Love waits.
And the magic trembled on the air, danced over the sea with a sound that might have been laughter. Tiny sparks of light skimmed over the surface, bobbing, twirling to spin into the star-strewn sky in a gilt cloud. The wolf watched, and he listened. Even when he turned back to the forest and its shadows, the answer trailed after him.
Love waits.
As the restlessness in him grew, beat with his heart, he shot down the path, powerful strides tearing the fog to ribbons. Now his blood heated with the speed, and veering left, he broke through the trees toward the soft glow of lights. There the cabin stood sturdy, its windows shining with welcome. The whispers of the night fell quiet.
As he bounded up the steps, white smoke swirled, blue light shimmered. And wolf became man.