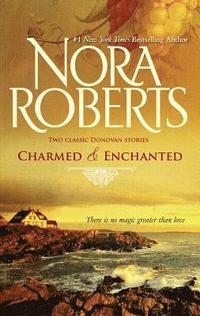 The Donovan Legacy features four stories about an unusual family. Morgana, Sebastian, Anastasia and Liam are cousins who share a special bond - they´ve inherited extraordinary gifts from their Celtic ancestors.
In book Three of the series, Charmed, Anastasia Donovan is unwilling to reveal her powers to her handsome new neighbour, author Boone Sawyer - until a crisis occurs and she´s forced to make a life-or-death decision.


Utdrag ur boken:
"My skill for magic is very limited." Still, she reached into her pocket, where she always carried a few crystals. With her eyes on Boone´s, she held them out in her palm. Slowly they began to glow, the purple of the amethyst deepening, the pink of the rose quartz brightening, the green of the malachite shimmering. Then they rose, an inch, two inches, up, circling, spinning in the air and flashing with light. "Morgana is more talented with such things."
He stared at the tumbling crystals, trying to find a logical reason. "Morgana is a witch too?"
"She´s my cousin," Ana said simply.
"Which makes Sebastian -----"
"Sebastian´s gift is sight."
He didn´t want to believe, but it was impossible to discount what he saw with his own eyes. "Your family," he began. "Those magic tricks of your father´s."
"Magic in its purest form." She plucked the crystals out of the air and slipped them back in her pocket. "As I told you, he´s very accomplished. As are the rest of them, in their own ways. We´re witches. All of us." She reached out to him, but he backed away. "I´m sorry."