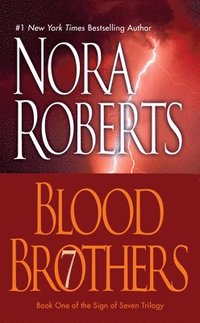 In the town of Hawkins Hollow, it´s called The Seven.
Every seven years, on the seventh day of the seventh month, strange things happen. It began when three young boys - Caleb, Fox and Gage - went on a camping trip to the Pagan Stone. And twenty-one years later, it will end in a showdown between evil and the boys who have become men - and the women who love them....

It had been the Pagan Stone for hundreds of years, long before three boys stood around it and spilled their blood on a bond of brotherhood, unwittingly releasing a force bent on destruction...

Every seven years, there comes a week in July when the locals do unspeakable things - and then don´t seem to remember them. The collective madness has made itself known beyond the town borders and has given Hawkins Hollow the reputation of a village possessed.

This modern-day legend draws reporter and author Quinn Black to Hawkins Hollow with the hope of making the eerie happening the subject of her new book. It is only February, but Caleb Hawkins, descendent of the town founders, has already seen and felt the stirrings of evil. Though he can never forget the beginning of the terror in the woods twent-one years ago, the sign have never been this strong before. Cal will need the help of his best friends, Fox and Gage, but surprisingly he must rely on Quinn as well. She, too, can see the evil that the locals can not, somehow connecting her to the town - and to Cal. As winter turns to spring, Cal and Quinn will shed their inhibitions, surrendering to a growing desire. They will form the corner stone of a group of men and women bound by fate, passion, and the fight against what is to come from out of the darkness...

This is Book One of the Sign of Seven Trilogy


Utdrag ur boken:
The boy grinned obscenely through the dark window. His face, his hands pressed against the glass bare inches away from her own. She saw its tounge flick out to roll across those sharp, white teeth, and those eyes, gleaming red, seemed as bottomless and hungry as the mouth of earth that had tried to swallow her in the dream.
Her knees wanted to buckle, but she feared if she dropped to the ground it would come crashing through the glass to latch those teeth on her throat like a wild dog.
Instead she lifted her hand in the ancient sign against evil. "Get away from here," she whispered. "Stay away from me."
It laughed. She heard the horrible, giddy sound of it, saw its shoulders shake with mirth. Then it pushed off the glass into a slow, sinuous somersault. It hung suspended for a moment above the sleeping street. Then it ... condensed, was all she could think. It shrank into itself, into a pinpoint of black, and vanished.