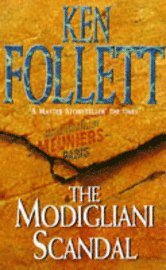 Modigliani. Unarguably one of the greatest artists who ever lived. Modigliani´s women. Those elongated haunting figures, as etarnally provocative as the Mona Lisa. And Modigliani`s missing masterpiece. A priceless lost treasure - or a chillingly dangerous game?
Up and coming artist Peter Usher has still to exhibit anywhere, still to make even the most modest mark on the London art scene. But as rumour turns to reality, Usher finds himself caught up in a race to uncover the shadowy figures behind a breathtaking scam. Will art genius ever be rewarded? Will the brush prove deadlier than the fun....?


Utdrag ur boken:
"What did you have to give for it?" he asked.
"I'm afraid I forked out fifty thousend pounds."
"It's worth double that."

"
Köp boken på amazon.se (betald länk)
Bok recensioner av The Modigliani Scandal :
gun
2012-03-17 15:43
It figures a lot of pictures in this story. Both fake and real. The question is asked why the fake paintings that are taken as true are valued so high as the artists who made ​​these are not valued so highly. These artists have done a better job than the first because it is not easy to copy a masterpiece.
This novel is different than others I have read by Ken Follett.
Betyg 4