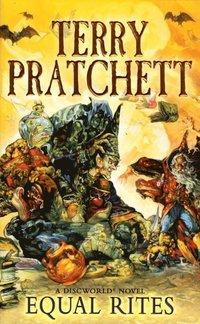 The third in Terry Pratchett's hugely popular Discworld series. The wizard Drum Billet decides the time has come to relinquish his power and choose a successor, who should by rights be the eighth son of an eighth son. The designated eighth son, though, is female, and wizards are meant to be male.


Utdrag ur boken:
a hint was to Esk what a mosquito bite was to the average rhino because she was already learning that if you ignore the rules people will, half the time, quietly rewrite them so that they dont apply to you.
If a things worth doing, its worth doing badly, said Granny, fleeing into aphorisms, the last refuge of an adult under siege.

Reality returned, and tried to pretend that it had never left.

I dont want to hit the ground. Its never done anything to me. ~Eskarina Smith