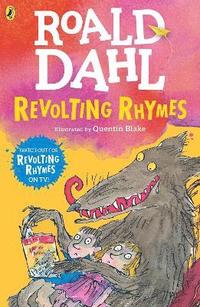 Six of the best-known fairy tales are retold, with some extremely surprising twists, by the master of the comic and the bloodcurdling - Roald Dahl.

They include:
Cinderella
James and the Beanstalk
Snow White and the Seven Dwarfs
Goldilocks and the Three Bears
Little Red Riding Hood and the Wolf
The Three Little Pigs

"In bouncy verse and pithy language, Dahl gives his own irreverent versions of some familiar fairy tales, and Blake's scrabbly, lively line-and-wash pictures capture the mood of manic lampoon... A sophisticated spoof."
- Bulletin of the Center for Children's Books


Utdrag ur boken:
Jack was nimble, Jack was keen.
He scrambled up the mighty bean.
Up up he went without a stop,
but just as he was near the top,
a ghastly frightening thing occurred -
not far above his head he heard
a big deep voice, a rumbling thing
that made the very heavens ring.
It shouted loud, "FEE FI FO FUM
I SMELL THE BLOOD OF AN ENGLISHMAN!"