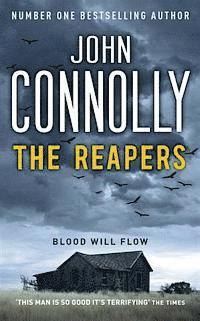 They are the Reapers, the elite among killers. Men so terrifying that their names are mentioned only in whispers. The assassin Louis is one of them. But now Louis, and his partner, Angel, are themselves targets. And there is no shortage of suspects. A wealthy recluse sends them north to a town that no longer exists on a map. A town ruled by a man with very personal reasons for wanting Louis' blood spilt. There they find themselves trapped, isolated, and at the mercy of a killer feared above all others: the assassin of assassins, Bliss. Thanks to former detective Charlie Parker, help is on its way. But can Angel and Louis stay alive long enough for it to reach them?

In my opinion The Unquiet is John Connollys best book. As I said before it is a mystery executed almost to perfection. That being said The Reapers didnt have an easy task to accomplish, I was aware of that. I expected less, but honestly, I didnt expect this kind of less.

In my opinion The Reapers is a mediocre and sometimes even laughable thriller book within a mystery series. Everything John Connolly has built around this amazing series falls to pieces because he wanted to give Louis, one of Charlie Parkers sidekicks, a whole book. Forget about the supernatural aura, the lyrical and beautiful noir-poetry of the author, the complexity of the story and most important, the quality of a series that always offered great books. The Reapers is such a bad thriller that it makes Daniel Silva or Harlan Coben looks like Gabriel Garcia Marquez.