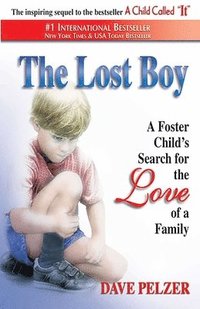 "
Köp boken på amazon.se (betald länk)
Bok recensioner av The Lost Boy :
cutie
2007-03-01 15:37
The lost boy is written by Dave Pelzer, a diligent consulted lecturer in USA who handles questions about child abuse and families in crises. This book is based on Dave's childhood. Dave has also written other books such as "A child called it", "The boy that survived" and a counselling book. This particular book is a continuation of Dave's shocking childhood description about what happened after that he at 12 years old had been taken care of by the authorities and was placed at a fosterhome.

In Dave's first book "A child called it", Dave related about how he since 4 years old had been neglected and assaulted by his mentally sick and alcoholic mother. He was isolated from his father and three younger brothers. He was treated worse than a dog and many times he wished to die.

In this book he's a foster child, he escaped from his mothers physical torture, but still couldn't find security- he was forced to move between five different foster homes, bullied and mistrusted he had a hard time making friends and was forced to work hard to be able to support himself.

A couple of weeks after that he'd been taken care of Dave found out that his mother was going to apply for custody of him. That was the last thing Dave wanted, for him to be taken care of by a women that treated him worse than a dog. This didn't scare him so much; he was more concerned about his brothers. How were their lives? Did their mother take all of her anger out on them now that she didn't have Dave? And what about dad, how could he let her treat Dave this way, when he claimed that he loved him? That didn't matter for Dave anymore. The important thing for him was that he didn't have to steal anymore and be degraded in front of his friends. Even though he lived with his foster parents Alice and Harold Turnbough, there were moments when he had to steal fodd from the kitchen. Alice was a person Dave trusted, she was more of a mum to him than his own mother ever had been.

During his years in foster homes Dave had to live with many different families. In each family there was always someone that had a problem with him. The kids of the family taught him a lot of stuffs that eventually put him into trouble. The worse kids were his so called "friends" at school. If he wanted to join a gang he had to put up with a couple of tests or challenges, to prove his reliability. It went so far that he even got the blame for the school fire. There was only one person that stood up for him and that was his friend Carlos. He's the one that helped Dave to run away from his mother.

Dave was really a shy little boy that loved his mother despite of her problems and the way she treated him. Unlike his mother he loved her very much, but she hated him so much that she often called him "It" and very rarely by his first name. She was meaner than the devil himself, mostly when she was drunk or in a bad mood.

The father on the other hand was nicer to him and called him his "little tiger", but even he was afraid of the mother. All of their quarrels were about Dave. The father often got so mad and fed up with everything that he often left the family for weeks, which only made the mother angrier. Dave didn't have any kind of relationship to his brothers, he didn't even get to play or speak with them. The family was a totally chaos. Alice and Dave on the other hand were best friends. In her arms Dave searched fot the love he'd never had, a mother's love. Alice was now the mother he never had.
Betyg 5