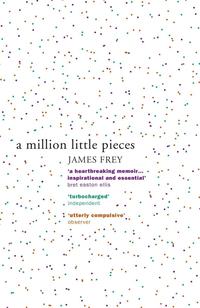 At the age of 23, James Frey woke up on a plane to find his four front teeth knocked out, his nose broken, and a hole through his cheek. He had no idea where the plane was headed nor any recollection of the past two weeks. An alcoholic for ten years and a crack addict for three, he checked into a treatment facility shortly after landing. There he was told he could either stop using or die before he reached age 24. This is Frey's acclaimed account of his six weeks in rehab.


Utdrag ur boken:
He looks over says what the uck she looks up and gasps. In her eyes is the greedy need, the desperate insanity, the awful shame and the complete obsession of crack.

"
Köp boken på amazon.se (betald länk)
Bok recensioner av A Million Little Pieces :
gun
2015-01-18 15:54
A novel that gives insight into the hell it is to get out of addiction. In this case it is James Frey trying to take out its coarse alcohol and drug abuse. Even if everything is not consistent with the truth, this is an instructive story.
It was interesting to take note of the facts as regards how many people manage to live sober the rest of life despite treatment.
I'm glad I got the opportunity to read the book for it means that I can better understand those with similar problems..
Betyg 4