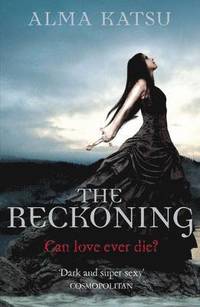 SECOND IN ALMA KATSUS GRIPPING SUPERNATURAL TRILOGY THAT BEGAN WITH THE TAKER Lanore McIlvrae is the kind of woman who will do anything for love. Including imprisoning the man who loves her behind a wall of brick and stone.

She had no choice but to entomb Adair, her nemesis, to save Jonathan, the boy she grew up with in a remote Maine town in the early 1800s and the man she thought she would be with forever. But Adair had other plans for her. He used his mysterious, otherworldly powers to give her eternal life, but Lanore learned too late that there was a price for this gift: to spend eternity with him. And though he is handsome and charming, behind Adairs seductive faÇade is the stuff of nightmares. He is a monster in the flesh, and he wants Lanore to love him for all of time.

Now, two hundred years after imprisoning Adair, Lanore is trying to atone for her sins. She has given away the treasures shes collected over her many lifetimes in order to purge her past and clear the way for a future with her new lover, Luke Findley. But, while viewing these items at an exhibit at the Victoria and Albert Museum in London, Lanore suddenly is aware that the thing shes been dreading for two hundred years has caught up to her: Adair has escaped from his prison. Hes free and he will come looking for her. And she has no idea how she will save herself.

With the stunningly imaginative storytelling and rich characterizations that fascinated readers worldwide and made The Taker a singular and memorable literary debut and an international sensation, Alma Katsu once again delivers a powerful evocation of the dark side of romantic love (Publishers Weekly) in her breathtaking new novel.

No good would come of itThats what was said at the time of a young mans fascination with magic. And for most of the young men held in magics thrall, nothing good did come of it: many were taken to the dungeon or the pyre, though Adair was saved by his familys high rank. A bad end came to his own tutor, the bedeviled old Prussian, Henrik, the one who had introduced Adair to the craft. Adair was too young at the time to do anything to save the old man when he was dragged off by the inquisitors, and his parents had made it clear that it was only with a lot of maneuvering that theyd kept this scandal from ruining Adairs life.
After Henrik was taken away, Adair did go to Venice to train as a doctorthat much was true. Given his peculiar leanings and the blight of association with the suspected heretic Henrikblack magician, alchemist, or wizard, depending on your dispositionyoung Adair declared that he would devote his life to medicine rather than to warfare or diplomacy or governance. His brothers and cousins had fulfilled those duties for the family, hadnt they? The physics art the blend of magic and alchemy, the natural and the supernatural would be Adairs future.
Of course, his name was not Adair then. Hed nearly forgotten his real name, the one hed been born with, his nearly unpronounceable given name and his illustrious and noble surname. Hed traveled in the peasant boys body for so long that his old name eluded him, like trying to hold smoke in his hand. And when it finally came to him he wrote it down, because a secret name was a powerful talisman. According to the tenets of magic, if someone learned his secret name, that person would then have power over him, be able to command him like a puppet.
His family had tried to turn him away from magic when they learned of his interest, but nothing could stop him once hed witnessed his first miraclethe one that proved to Adair that there was more to life than what hed seen with his own two eyes. Old Henrik had used his bag of well-practiced tricks to impress his young wards, the special boys hed already determined had the inclination or the gift or both, as Adair did. The tricks were minor manipulations: for example, combine a dram of a malleable solid with a drop of a liquid, work the two together and witness, the compound became hard and fast like a piece of iron. Want to touch it, see for yourself? Henrik had offered with a sneer of superiority to his awestruck charges. Such tricks passed for magic among the credulous.
Touch it if you dare.
It wasnt until a few years later, when he and Henrik had done many experiments together in the old mans studio, that Henrik showed Adair the one impressive feat he could do. Henrik brought that baby bird back to life, though how hed managed the feat had been as much a mystery to Henrik as it was to Adair. There was no disputing that the bird was dead to begin with: Adair had held its limp body in his hand, light and fuzzy as a dandelion head, loose bones in a thin sack of flesh. No, there was no question that Henrik had indeed brought the bird back from death, but it wasnt quite right the few days it lived, glassy-eyed and nearly inert, not a peep nor squawk from it.
Adair argued that they needed to try the spell on a man, because, once revived, a man would be able to tell them what it was like on the other sidewhether there was a heaven and hellbut Henrik recoiled from the idea. That was heresy and possibly witchcraft, and even as he was seized with the idea, Adair had to agree.
The one thing Adair had not been able to determine, not in all his time and study, was where the powers came from. Changing the materials from liquid to solid, or bringing the baby bird back to life: had the power come from the materials themselves? Did it originate with god? Or could it be proof of the presence of the devil? After all these years, Adair was no closer to knowing, but he was beginning to believe it was pure energy, a certain rare, remote energy that existed in the ether. An energy you could generate with enough focus and determination if one knew how to harness it. Many years of collecting recipes and perfecting spells elapsed before he acquired the crown jewel of his power: the alchemists holy grail of immortality. Looking back, Adair saw that every experience hed hadeverything hed learned and done in the pasthad prepared him for acquiring that capability.