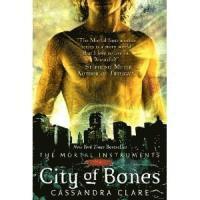 Their hidden world is about to be revealed....

When fifteen-year-old Clary Fray heads out to the Pandemonium Club in New York City, she hardly expects to witness a murder -- much less a murder committed by three teenagers covered with strange tattoos and brandishing bizarre weapons. Clary knows she should call the police, but it's hard to explain a murder when the body disappears into thin air and the murderers are invisible to everyone but Clary.

Equally startled by her ability to see them, the murderers explain themselves as Shadowhunters: a secret tribe of warriors dedicated to ridding the earth of demons. Within twenty-four hours, Clary's mother disappears and Clary herself is almost killed by a grotesque demon. But why would demons be interested in ordinary mundanes like Clary and her mother? And how did Clary suddenly get the Sight? The Shadowhunters would like to know....


Utdrag ur boken:
Have you fallen in love with the wrong person yet?'
Jace said, "Unfortunately, Lady of the Haven, my one true love remains myself."
..."At least," she said, "you don't have to worry about rejection, Jace Wayland."
"Not necessarily. I turn myself down occasionally, just to keep it interesting.

I don't want tea," said Clary, with muffled force. "I want to find my mother. And then I want to find out who took her in the first place, and I want to kill them."
"Unfortunately," said Hodge, "we're all out of bitter revenge at the moment, so it's either tea or nothing.

Meanwhile, Simon added, I wanted to tell you that lately Ive been cross-dressing. Also, Im sleeping with your mom. I thought you should know.

I don't want to be a man," said Jace. "I want to be an angst-ridden teenager who can't confront his own inner demons and takes it out verbally on other people instead."
"Well," said Luke, "you're doing a fantastic job.