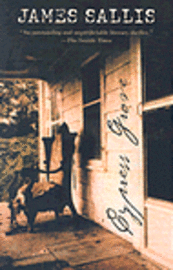 As he has shown so often in previous novels, James Sallis is one of our great stylists and storytellers, whose deep interest in human nature is expressed in the powerful stories of men too often at odds with themselves as well as the world around them. His new novel, "Cypress Grove," continues in that highly praised tradition. The small town where Turner has moved is one of America's lost places, halfway between Memphis and forever. That makes it a perfect hideaway: a place where a man can bury the past and escape the pain of human contact, where you are left alone unless you want company, where conversation only happens when there's something to say, where you can sit and watch an owl fly silently across the face of the moon. And where Turner hopes to forget that he has been a cop, a psychotherapist, and, always, an ex-con.
There is no major crime to speak of until Sheriff Lonnie Bates arrives on Turner's porch with a bottle of Wild Turkey and a problem: The body of a drifter has been found--brutally and ritualistically-- murdered and Bates and his deputy need help from someone with big-city experience who appreciates the delicacy of investigating people in a small town. Thrust back into the middle of what he left behind, Turner slowly becomes reacquainted not only with the darkness he had fled, but with the unsuspected kindness of others. Brilliantly balancing Turner's past and present lives, "Cypress Grove" is lyrical, moving, and filled with the sense of place and character that only our finest writers can achieve. It is proof positive that the acclaim James Sallis has enjoyed for years is richly deserved

What a big disappointing this book was!

The reasons why I wanted to read Cypress Grove was because Ive read very good reviews of this book, there were few but good reviews nevertheless. Besides the author is kind of unknown which in my case instead of being something bad its more appealing, but the most important reason was because Ive read that James Sallis was something of a James Lee Burke. Big words there big!

Being honest and perhaps a bit harsh Id say that the only similarity between the authors is that both write books, besides that, I think James Lee Burke is in every aspect in another galaxy when speaking of Crime Fiction/ Mystery.