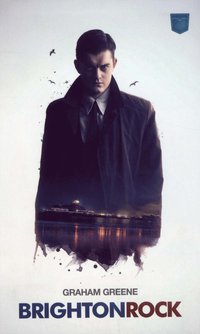 A story of gang war in the underworld of Brighton. Pinkie, only seventeen, has already brutally killed a man. Now believing he has escaped retribution, he is unprepared for Ida Arnold, who is determined to avenge the death.

He got out of bed in his half drowse [...] and felt his way to the washstand. He took up his tooth-mug, poured out a glass of water and heard a voice say, Pinkie? What is it, Pinkie? He dropped the glass and as the water split across his feet he bitterly remembered.
He said cautiously into the dark, Its all right. Go to sleep. He no longer had a sense of triumph or superiority. He looked back on a few hours ago as if he had been drunk then or dreaming  he had been momentarily exhilarated by the strangeness of his experience. Now there would be nothing strange ever again  he was awake. You had to treat these things with commonsense  she knew. The darkness thinned before his wakeful and calculating gaze  he could see the outline of the bedknobs and a chair. He had won a move and lost a move: they couldnt make her give evidence, but she knew ... She loved him whatever that meant, but love was not an eternal thing like hatred and disgust. They saw a better face, a smarter suit ... The truth came home to him with horror that he had got keep her love for a lifetime; he would never be able to discard her. If he climbed he had to take Nelson Place with him like a visible scar; the registry office marriage was as irrevocable as a sacrament. Only death could ever set him free.