Why me? A stolen childhood 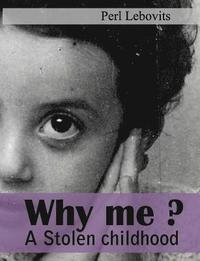 Mom told me that when she came with her mother and little brother, a Nazi asked her how old she was. Grandma had instructed her to give a younger age so that she could be with the other children. But, like a flash from clear sky, my mother tugged at her cheeks and said she was older instead. Mom said she was seventeen, and Grandmother shook her arm, shouting.
Mom was in shock and ran and ran into the forest. (1) (2) See Inanna's journey and the description of the myth for an understanding of the descent into the underworld and all the difficulties she faces. My mother was forced as a child into this descent, unaware what horrors would happen to her during the war. She survived, but her phases got stuck. She didn't make it all the way out of the descent. The child was deprived of her innocence and trust. A large piece of my mother's soul died in the concentration camp's descent. She tried to heal by telling me about her trauma, but I was only four years old.