The Anatomy of Story - 22 Steps to Becoming a Master Storyteller 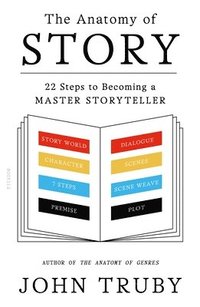 "A veritable bible for screenwriters." - Backstage

John Truby is one of the most respected and sought-after story consultants in the film industry, and his students have gone on to pen some of Hollywood's most successful films, including "Sleepless in Seattle", "Scream" and "Shrek". Based on the lessons in his award-winning class, 'Great Screenwriting', "The Anatomy of Story" reveals all his secrets for writing a compelling script. The book draws on a broad range of concepts and archetypes from philosophy and mythology, offering fresh techniques and insightful anecdotes alongside Truby's own unique approach to building an effective, multifaceted narrative. The foundations of story that he lays out are so fundamental that they are applicable - and essential - to all writers, from novelists and short-story writers to journalists, memoirists, and those interested in narrative nonfiction.

"If you're ready to graduate from the boy-meets-girl league of screenwriting, meet John Truby... (His lessons draw) epiphanies that make you see the contours of your psyche as sharply as your script." - LA Weekly

"'The Anatomy of Story' is concrete and practical without resorting to simplistic 'three-act structure' screenwriting clichés. It will be an indispensable guide to writing your first great script, and the perfect survival manual to help you negotiate the often confusing, contradictory, and cutthroat world of professional screenwriting." - Larry Wilson, cowriter/coproducer of "Beetlejuice" and cowriter of "The Addams Family"


Utdrag ur boken:
Everyone can tell a story. We do it every day. "You won't believe what happened at work." Or "Guess what I just did!" Or "A guy goes into a bar..." We see, hear, read, and tell thousands of stories in our lives.
The problem comes in telling a great story. If you want to become a master storyteller, and maybe even get paid to be one, you run up against tremendous obstacles. For one thing, showing the how and why of human life is a monumental job. You have to have a deep and precise understanding of the biggest, most complex subject there is. And then you have to be able to translate your understanding into a story. For most writers, that may be the biggest challenge of all.
I want to be specific about the obstacles of story technique because that's the only way a writer can hope to overcome them. The first obstacle is the common terminology most writers use to think about story. Terms like "rising action," climax," "progressive complication," and "denouement," terms that go as far back as Aristotle, are so broad and theoretical as to be almost meaningless. Let's be honest: they have no practical value for storytellers. Say you are writing a scene where your hero is hanging by his fingertips, seconds from falling to his death. Is that a progressive complication, a rising action, a denouement, or the opening scene of the story? It may be none of them or all of them, but in any event, these terms don't tell you how to write the scene or whether to write it at all.