No promises in the wind 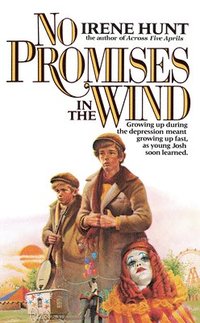 No Promises in the Wind (1970) is a novel by Irene Hunt. The novel is based upon the 1930s during the Great Depression. The book is about the journey of Josh Grondowski as he suffers from the harsh times of the period with almost no money.

[edit] PlotJosh's main talent lies in the piano, having been taught by his mother. He and his friend Howie were praised by their teacher, Miss Crowne. However, while living with the continuous ridiculing and temper of his father, he sets upon the decision to leave Chicago and find a living on his own. His mother, Mary, supports his decision against her will, realizing that Josh's conflicts with his dad, Stefan, and their entire family's lack of food would eventually lead to deeper problems.

Despite Josh's reluctance to accept Joey, Howie convinces Josh to bring him along, which later turns out to be a good decision. With the hope that their musical talents could earn them a living, they set out. Howie brought his banjo, and Joey was a great singer. On the first day, Joey's singing combined with Howie's talented playing allowed the trio to gain 78 cents. Josh realizes Joey's importance and no longer regrets bringing him along.

However, while trying to get to Nebraska by riding on a freight train, a tragedy fell upon the trio. (Wikipedia)


Utdrag ur boken:
"They hop freights, and in so doing dozens of them ar killed and crippled. The hitchhike: they beg and steal and fight one another. They are halfstarved, scantily dressed, susceptible to diseases brought om by malnutrition and exposure. They ought to be in warm and comfortable homes: they ought to be in school. Instead, they are struggling though an icy winter, lucky if they are able to stay alive from one day to another.

Skriv egen bokrecension till No promises in the wind